I woke early, or rather was awoken by nature’s alarm clock. I left the window open the night before to keep the room cool and the jungle birds were enthusiastically announcing their presence to the world. I was tired and refused to get out of bed so I just laid there for an hour listening to the racket from outside and watching the shadows cast on the wall opposite slowly fall as the dim sun rose in the morning sky.

Eventually boredom got the better of me, so I got up, packed what few things I had bothered to unpack, and headed outside to see what was happening on the site. As it turned I need not bother because nothing much was happening at all. The rest of my jungle trekking party were still in bed, including Deaw who was snoring away in the front seat of his pickup. The porcupines had retreated back to wherever they called home and the campground was silent.

After a brief mooch around the site I decided to rest against the trunk of a tree. I checked that there were no ants’ nests or other obvious hazards and sat down, resting my back, soaking up the early morning sunshine. It was going to be another warm day (only 28C) but at present it was still cool enough to sit in the sun without roasting to death, so I sat their and did absolutely nothing.

Half an hour passed and finally there were sounds of life from my companions in the lodge next door – the usual stomps, crashes and mumblings of people still half asleep. Fast forward 20 minutes and bodies emerged into the sunlight – hungry, tired and aching by the looks of it. The noises had evidently woken Deaw as well and he emerged from his car. I asked him how he slept and he replied ‘like a baby’ – well that made 1 out of 4.

Breakfast over in the restaurant was a simple affair – a choice of noodles, soup or rice, but there was coffee – result! I chose rice and fried egg and I was quite happy until Andrew’s food arrived – His soup came in a massive bowl and was loaded with goodies – damn you food envy!

We finished up and before we left we picked up some snacks for the day. The aussie couple had forgotten to bring for snacks the previous day and Andrew had suffered in silence for quite a while until I realised has was struggling and gave him a spare Country Crunch bar I had kicking around in my bag. Today he was intent on not making the same mistake so he bought enough food to feed a small country.

We loaded our gear up and headed out for our second trek of the trip – this time setting out from the car-park nearest to the viewing tower. The first half hour followed the dirt path over the grassland hills. 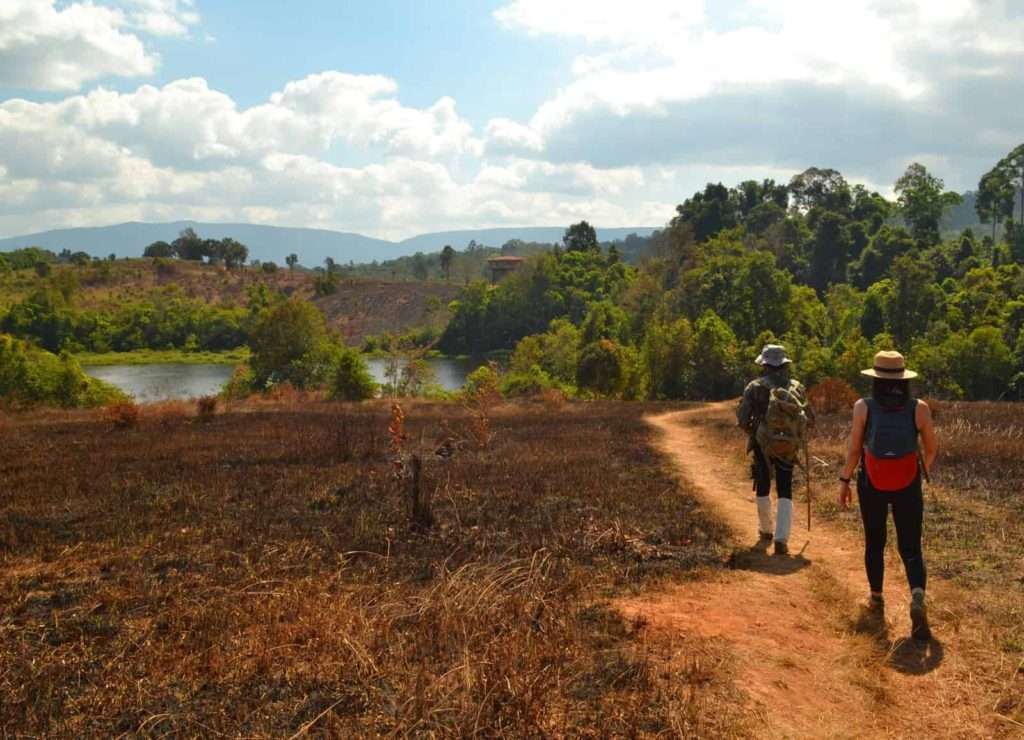 After a while we veered off the path and headed for across the grassland, scorched black by the recent controlled burning conducted by the park rangers to encourage new growth.

Soon we were venturing back into the jungle again and it was a great be back under the protection if the canopy – it was only 10am but it was already roasting out in the open!

Deaw soon discovered elephant track and he decided to follow the tracks into. We made slow going through the thick jungle bush, it was very different undertaking compared to the previous day’s established path networks.

The tracks meandered steadily downwards to a stream at the bottom of a small valley. Every so often we would hear the deep whooshing sound of the huge wings of a horn bill high above. I tried in vain to get a good shot but alas they were too high and I could only manage a quick snap, my 200mm lens struggling to make out any real detail.

The tracks reached the valley bottom, where they dissapeared into the tangled mess of plants that were growing in the shallow, muddy river that spanned about 10 metres.

This place was leech central so treading across the river would have been a disaster. Fortunately Deaw had a better idea and we turned left and heading parallel to the river for a few minutes.

We were stopped by a large fallen tree in our path and as we were climbing on it Deaw told us a story about how he once almost walked straight into a bear that was busy eating and didn’t notice his party until they were within 3m. Both bear and humans had the fright of their lives and retreated as fast as possible…

It turned out the tree was key to us getting across the river. It had fallen right across the riverbed and was large enough for us to clamber across to get to the other side.

The rest of the group headed across the tree bridge and I took up the rear guard, keen to get a video of us all crossing the river. Half way across everyone stopped and there was some commotion and pointing of cameras. I headed over, keen not to miss out on what are often very temporary sights.

It turned out I needn’t have bothered, because there in front of me was a large tortoise chilling on the tree in the shade between the branches and he was interested in going anywhere, even with a group of trekkers literally walking over the top of his head!

We carried on up the other side of the valley and down into a trough on the other side. Here we stopped for a few minutes while Deaw took out a huge bag of salt from his rucksack and poured it all over the ground. Afterward he poured a whole bottle of fish sauce because elephants and other animals loved it, apparently, and could detent the scent from up to a mile away.

Detour complete, we headed through the jungle once again, ascending the side of the valley along a narrow track. A few minutes later we reached the edge of the jungle and burst out into the open grassland.

Once my eyes had adjusted to the glare of the midday sun I took in our surrundings. We were on the top of a grassy hill, overlooking a small lake. It was a gorgeous view and and I paused to admire it. Sweeping grassland to the front was flanked on all sides by jungle, with tracked meandering down towards the lake.

We trekked on down towards the lake and soon a watchtower came into view. Deaw informed us that the top of the tower was our lunch stop, and almost immediately everybody started to pick up the pace. I guessed my stomach wasn’t the only one complaining!

We stopped and ate lunch in the welcome shade of the watch tower, sat on benches that looked out over the reservoir on one side and over towards the jungle on the other. Somewhere in the canopy a family of gibbons were having a discussion and their cries carried audibly into the tower.

Bellies placated we set off along the final stretch of our trek, following a well used footpath through the grasslands, back towards the car.

The path was busy with tourists, being one of only 2 hikes that can undertaken without a guide and as such I resigned myself to the fact that the wildlife spotting opportunities for our trek were pretty much over – more people equalled fewer animals.

As the car came into sight however, so did a my favourite bird – an eagle soaring effortlessly overhead, using a thermal to gain altitude – what a brillant way to end the trek! 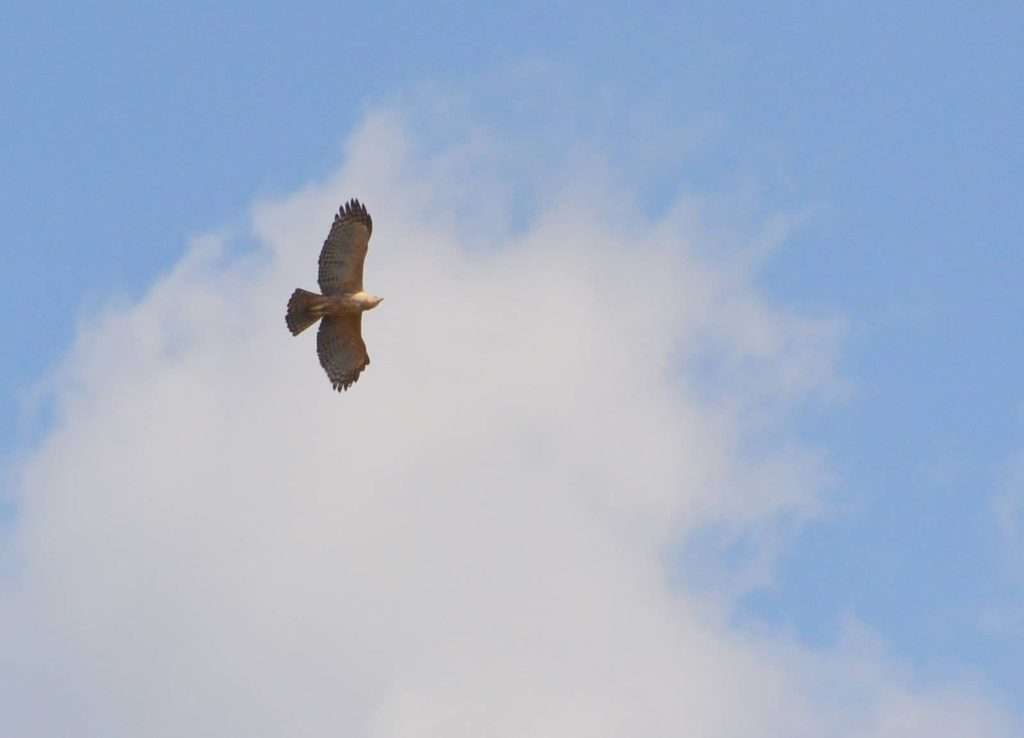 The plan for the rest of the afternoon was to visit some waterfalls, so we hopped in the pickup and Deaw drove us down to Haew Suat, a small waterfall with 5m drop, whose main claim to fame was being the waterfall that Leonardo DiCaprio’s character jumped off in the movie ‘The Beach’.

Like most Thai waterfalls in close proximity to roads, the place was rammed with tourists of all nationalities. I stopped to take a video and a few photos but didn’t linger for long, given how busy it was.

Next we drove towards the southern entrance of the park and after half an hour arrived the carpark that serves Haew Narok waterfall.

This carpark, though far larger and more spectacular, was quieter than the previous one, on account of the waterfall being a 2km hike away and it being located much farther away from the northern entrance of the park where all the main hotels were.

We strolled down towards the waterfall, glad to being only carrying camera equipment and a bottle pf water each. About 300m from the falls Deaw veered off the main pathway and asked us to follow him. We headed up until the jungle for the final time on the trip and along a disused footpath.

As we walked along on our right we were flanked by a wall of 6 foot high concrete posts that ran unbroken through the jungle. Curious, I asked Daew their purpose.

He explained that they were installed a number of years ago to stop elephant families from venturing too close to the top of the waterfall, after 5 elephants fell down the waterfall to their death.The pillars fulfilled their purpose, with no more elephants dying for years afterwards.

Unfortunately this all changed 2 months prior to my trek, when a baby elephant got swept away in heavy rains. The remaining elephants waded in to try and save the baby but in the end 11 elephants went over the falls and sadly died.

I mulled over this rather depressing tale and carried on along the narrow path until we finally reached our destination – an isolation outcrop high above the falls.

The route down to the cliff edge looked seriously dodgy – there were steps, just a slippery path, and the only safety feature was a rotten piece of wood jammed between two bamboo trees to form an improvised rail.

I would normally pass on going down such a route but I had a feeling that this was a sight I didn’t want to miss. A bit of shuffling later and I was stood overlooking the massive waterfall, taking in the gobsmacking view.

Far below the two lower tiers of the waterfall looked deceptively small but it was clear that elephants wouldn’t have stood a chance once they went over.

To the Bat Cave!