In July 2021 me and my friend Lizzy spent 8 days hiking the South Downs Way, a 100 mile long Hiking and Cycling trail in the South East of England.

Conditions were perfect, if a little hot, and we had a thoroughly enjoyable time!

What is the South Downs Way?

The South Downs Way is a national trail which follows the course of the South Downs National Park in South East England. It begins in Winchester and runs roughly due east, ending at the foot of the Downs in Eastbourne, West Sussex.

The name ‘Down’ originates from the Old English word ‘dūn’ meaning hill, and the Downs themselves are a series of hills that run the entire length of the park.

Most of the trail sticks closely to the top of the steep, northern escarpment that runs the length of the Downs, offering breathtaking views throughout the majority of the 100 mile route.

The trail mostly follows the Old Drovers trails over the tops of the hills, some of which have been in use for over 4000 years. Due to the difficulties and dangers of navigating the muddy clay paths of the Weald below, travelers chose to stick to the higher and dryer route.

How were they formed?

Millions of years ago, the whole of the South Downs area was under the sea. As tiny marine animals died they fell to the sea floor and released calcites, a mineral that is the build block of sedimentary rocks such as limestone and chalk.

The Downs were originally a long dome like ridge of rock. However erosion split the North and South Downs into two distinct areas and glacial and river erosion led the to formation of the valleys between the Downs.

Both ends of the route are served by nearby train stations at Winchester and Eastbourne. Each offers direct trains to London. There area also a number of train stations along the route if you want to complete the trail in sections. At Southease station the SDW runs right across the platform!

The route has been popular with section and thru hikers for many years, but more recently has become immensely popular with cyclists, especially bike-packers.

Winchester has numerous camping shops and supermarkets to stock up with supplies before the start of the route. There are also plenty of pubs and cafes along the route to grab food and beverages. Though some of the cafes don’t open until 10am and many country pubs shut between 3pm and 6pm for an afternoon break.

There are also a number of villages just to the north of the route which you can detour to, though this will usually add an hour or so to your day’s walking. 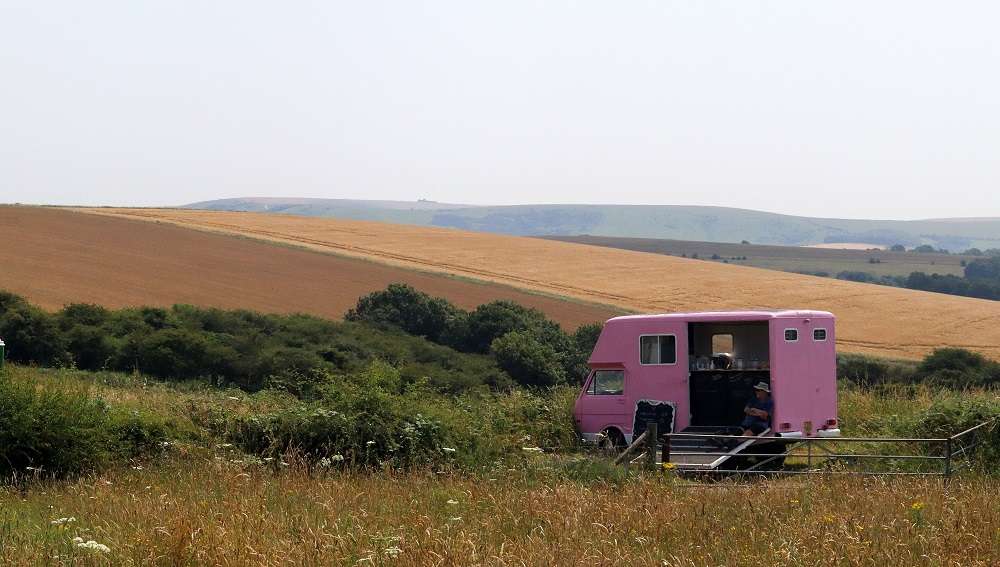 Ramblers Coffee Shop, one of the small pop-up cafes on the top of the South Downs Way

Water supplies are almost non-existent on the top of the Downs (with the exception of the odd café here and there),so you should plan to carry enough water to last you for the whole day’s walking.

There are no reliable streams on the top of the hills, due to the porous chalk, with most streams being winterbourne in nature.

Also a large part of the downs is farmed, so pesticides and fertilizers are likely present in what water you might find.

I tended to find that each hill seemed to run about 6 to 7 miles before descending into the valley.

Fortunately there are water supply points in the valleys between each of the Downs from which you can draw water, so make sure that you always top up before the next hill.

There are numerous options for accommodation along the route, including B&Bs, hotels, camping and bunk-houses. If you are travelling in the summer months and not taking a tent, then it is pretty much essential to book ahead and stick to a well planned itinerary.

If you are happy to camp wild-camp if necessary, then you can just turn up and wing it like us. Make sure that you have enough water to cook dinner and also have enough spare for the next leg.

The path runs almost entirely along well marked chalk and flint path. Even in heavy rain they are easily manageable, though the chalk can get slippery under foot when wet.

If you want to know more about the journey then take a look at my trip diary.