2 days in Ho Chi Minh City and I was done. The non-stop pestering from hawkers, combined with the constant pipping of horns, was enough to drive me to breaking point.

So I hopped on a flight back to Bangkok and by 9pm I was sat at home on my pc, researching what to do for the rest of the week.

The idea of jungle trekking in Khao Yai had been rattling around in the back of my mind ever since I went camping there with friends the previous month, so after a bit of googling I found a company that offered the kind of experience I was looking for – a small group with more time trekking and less time visiting Khao Yai’s tourist traps (which admittedly are still very beautiful).

I sent the company a Whatsapp message asking about their next availability for a 2 day trek, hoping that there would be something in next few days and I was somewhat shocked when I received a reply back almost immediately with ‘tomorrow morning, 6.30am’.

My mind raced – it was now approaching 10pm and I would have to pack all my gear before going to bed and setting an alarm for 5:45.. should I ask about other dates?

Balls to it. “Excellent. Book me in. I’ll get packing.”

Fast forward 12 hours and I stood inside the reception area of the Khao Yai visitor’s center, attempting to wake myself up, while Deaw, our guide, showed us round a taxidermy display of the different animals we might see on our trek if we were very lucky.

It turned out that Khao Yai was home to a wide range of animals, far more varied than I expected, and hardly any of which I had seen in my previous camping visit (I had only seen Macaque monkeys and some deer). Wild elephants roamed freely through the jungles, two species of gibbon lived high in the jungle canopy, and there was a reclusive family of tigers that lived in one of the more remote valleys (their location is a closely guarded secret).

Tigers have been hunted almost to extinction in Thailand, partly because their body parts are highly sought after in chinese traditional medicine and partly because tigers are rather adept at killing people. Deaw recounted the story of the last fatal tiger attack in the park, back in the 1980s. A little girl who lived with her family in the park was writing in a book when her pencil fell through the floorboards. She went outsde the house to retrieve the pencil but was attacked by a tiger that was hiding under the house.

The girl’s screams woke the other occupants of the house and the tiger ran away, but the girl died the next day in the hospital. Rangers set up an ambush for the tiger but the tiger managed to claim one more life (one of the rangers in the ambush itself) before it was killed.

The tour of the visitors’ center ended and after a well needed coffee break we headed out on our first trek, towards the north end of the park.

Trekking was a two state affair. Most of the time I was half-bored trekking along, following our guide as we meandered seemingly aimlessly through narrow jungle paths. Every so often Deaw would stop to point out some interesting feature on the ground, such as termite mounds, or elephant dung.

Alternatively he would have us crane our necks up to look at the impossibly tall trees as he explained the important features of the eco system. Deaw explained how one tree started life in the high boughs of other trees and then cascaded multiple trunks and roots downwards until they finally reached the ground. The tree would then slowly grow around the host tree until it finally, after many years, killed the host. Every so often we would pass these trees and you would see the rotting corpse entombed within the tendrils of the parasitic tree.

About 30 minutes into the trek we had our first encounter with animal life, a Banded Kingfisher, chilling out on a branch only 5 metres from the track. This beautiful bird is unique amongst kingfishers as it doesn’t need to live near a pool of water to survive.

What amazed me was how our guide was able to spot the bird. Even after he told me exactly where to look it took me over a minute of staring before I was able to see the creature. I had already come to the conclusion that trekking without a guide would be a terrible idea due to navigation through the jungle paths being near impossible, but I was beginning to realise that without a guide I would have walked past most of the wild animals that lived in the canopy without ever noticing their presence.

It was early afternoon when we spotted the rarest prize of the trek – A family of endangered white handed gibbons feasting merrily on the fruits of a fig tree. These gibbons live in small family groups and roam across large territories, swinging effortlessly from tree to tree with their elongated arms. I stood transfixed and watched the group for about twenty minutes until my neck was stiff and sore.

Eventually neck ache got the better of me and I decided to lie down on the ground to continue watching the gibbons. Unfortunately the colony of ants whose house I had just sat down on were less than impressed with my home invasion and decided to evict me forcefully. Within seconds I was a ridiculous screaming mess as I attempted to dislodge the angry ants, most of whom were busily biting my bottom. The rest of my trekking group looked on in shock as I desperately dropped my shorts and undies, and proceeded to whack my bottom with great enthusiasm.

Once I was certain that all the ants had been removed from my bum and clothing, I pulled my shorts back up and apologised to the group, all of whom were in fits of giggles, for my impromptu strip show. The experience had certainly taught me a lesson and I spent the rest of the trek avoiding sitting on the floor…

The final hour of the first day’s trekking was pretty quiet and we didn’t see any more interesting animals. We followed the path back to the road and then were driven up to the campsite where we could check into our accomodation and grab some dinner at the local restaurant, ready for the evening’s night safari. The group I had joined (consisting of 2 Australians) had chosen to stay in huts for the trip rather than stay out in the jungle in hammocks and I didn’t want to cause complications – I would have much preferred to camp in the jungle but that could wait for a future trip.

By the time we arrived at the campsite the sun had set and I was starving. We sat down and ate dinner, a simple Thai affair with dishes of rice, noodles and a curry. Half way through dinner I heard a rustling sound from behind me and was shocked to see a huge porcupine bumbling around on the grass behind our table. 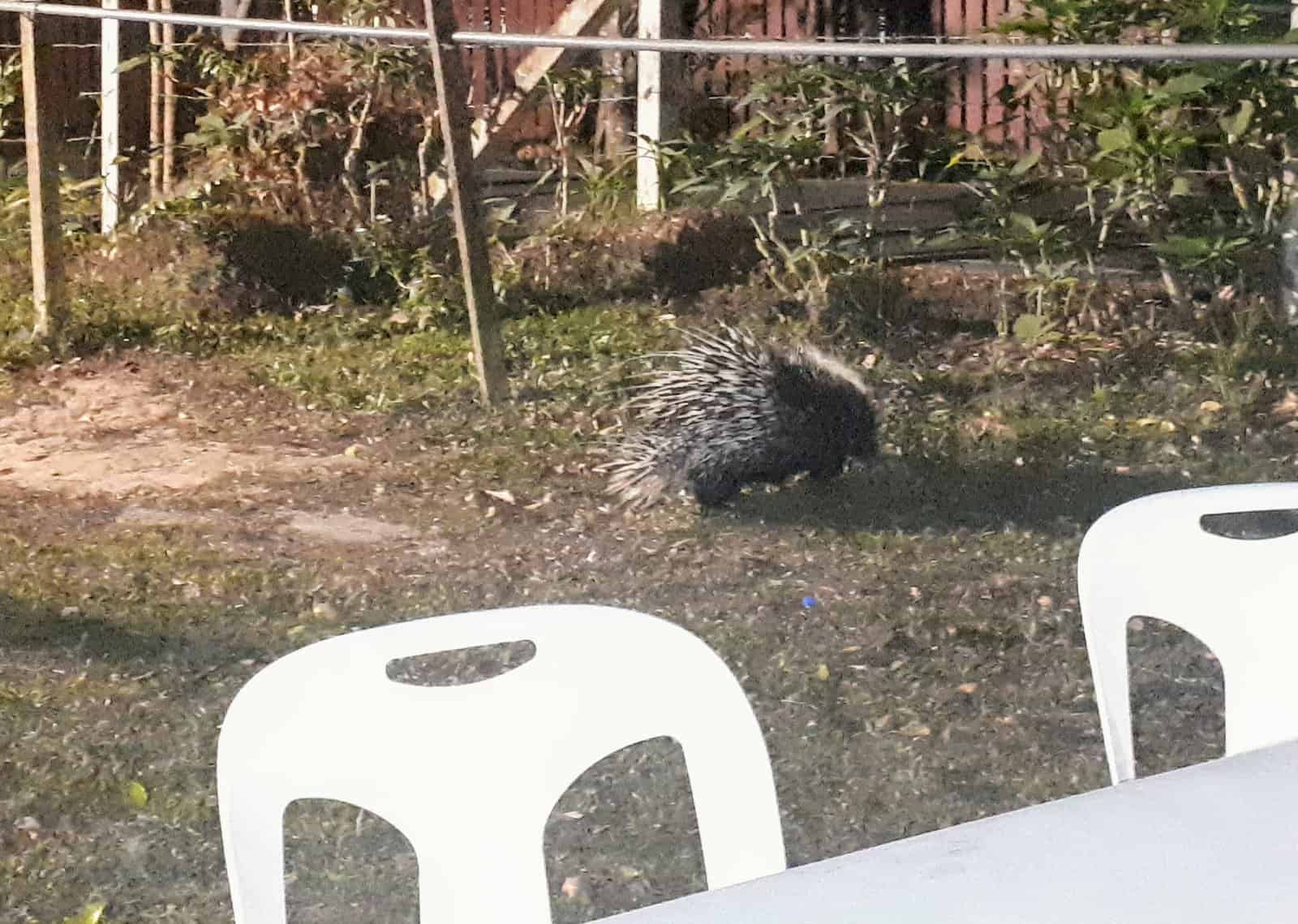 Soon the porcupine was joined by others and they seemed to be everywhere, crashing about in search of food!

As we were finishing dinner our transport for the evening’s night safari arrived, a Toyota Land cruiser, and on top was a little old lady wearing a woolly bobble hat. I was somewhat amused that the lady was wearing the hat, given that the temperature back in Bangkok rarely dropped below 20 Degrees C, later on in the evening I would understand!

We piled onto the back of pickup truck and headed out into the darkness, back along the park roads that we had travelled along earlier  in the day, but now they were transformed by the night.

There were no street lights in the park and there was almost no moon, so the only illumination came from the pickup trucks two dim headlamps and from the high powered spotlight in hands of the little old lady stood up at the front. The light swept slowly from left to right, searching for the nocturnal animals that command the park after night falls.

Every so often a pair of small round reflections would give away the presence of the animals on the grasslands and the torch would stop. Samba deer and Barka deer roamed freely at night and we passed dozen of them, together with plenty of meandering porcupines.

I had originally hoped that we might see the odd elephant, as they were more frequently seen in the evenings, but half an hour into our safari and I had all but given up hope – we were already past Sai Sorn reservoir and were nearing the northern end of the park.

We rounded the final bend and headed towards the edge of the jungle. The the little old lady swung the beam round the left and homed in a large animal abound 100 yards away, standing in the middle of a salt lick – a large male elephant!

Excitedly we stopped and watch the huge beast as best we could from the distance as it feasted on the salty earth. Needless to say I was chuffed to bits! I tried to take a photo of the elephant but it was too far away and the photo turned out too blurry and noisy…never mind!

After a while we turned around and slowly headed back to our base. By this point our tour guide, Deaw, was absolutely freezing and was huddled in a ball on the floor. The temperature had dropped to 12 degrees and combined with the wind chill and humidity it was very chilly indeed.

I would have felt sorry for him but I had asked him why he wasn’t bringing a jacket as we were setting off and he replied ‘I am from Khao Yai and don’t need one’ – I think he regretted his choice! I was toasty warm wrapped up in my duck down jacket (these sorts of adventures were the reason I bothered to bring it Thailand) but the wind on my face was enough!

The return journey was pretty uneventful and the day’s activities were starting to catch up with us – everyone was knackered! We arrived back at the campsite, bade farewell to the safari guide ad heading for our lodges and well deserved slumber!

Day 2 – Trekking, waterfalls and the batcave