Note: I’m calling this day zero because I didn’t start hiking until 7pm…

At 14:50 the school bell rang, heralding the beginning of the Easter holidays and I herded the class impatiently out of the door. With the last pupil out of the room I had a quick glance around to make sure there were no strays crawling under desks searching for lunch boxes or long lost Pokemon cards. 95% confident their were no stragglers I flicked the lights, slammed the door shut, locked it behind me and bolted for the 3:10 train.

I had already transformed into super-hiking-man at lunchtime and my rucksack was now firmly attached to my back, fully packed and ready to go (or at least I thought it was). I power walked the 15 minutes to station and then sprinted down the platform, hopping on the train just in time – deliberately avoiding eye contact with the conductor, who was less than impressed with my athletic prowess.

Getting to the start of the Pennine Way is remarkably easy compared to most other UK long distance trails and by early evening I was trundling off the train at Edale behind a group of overly happy uni student types who didn’t look at all like they were going hiking for the weekend. I strode up the lane towards the Old Nag’s Head Pub, the 16th century former smithy that marks the start of the Pennine Way, and ordered a pint of Guinness to toast the beginning of my journey and Easter holidays.

Due to transport issues (i.e. me getting the wrong train) I was running an hour behind schedule and I had briefly considered just buying half a pint to speed things up – I quickly discarded this idea on the grounds that it would certainly bring bad luck and so instead I inhaled the pint and plonked the empty back on the bar, much to the bemusement of the bar lady who had just served me.

I took a long, envious look at the other clientele in the pub – all sat down with their pub dinners and their pints – and headed out the door wondering what kind of madman I was to leave all this for a cold, lonely night on the fells. The first of the 400+ signposts that mark the route of the Pennine Way stood over the road and off I marched grumpily into the evening sun.

The first couple of miles on the trail consisted of a gentle climb westward along and out of the Edale valley and every so often I would stop and turn to glance back at the quaint little hamlet, a watercolour picture in the soft evening light. If this was what the Pennine Way was like it was going to be a doddle!

Within half an hour I hit the first hurdle and the true nature of the PW was revealed in the form of Jacob’s Ladder – a steep, zigzagging, set of steps that served as gatekeeper to the Kinder Scout Plateau above. Within seconds I was a breathless mess and re-evaluating my choice of beverage with every queezy burp.

I had no choice but to soldier on as best I could, as by now the sun had set and I urgently needed to reach the top before I lost the last of the light – my ultralight head-torch was great for trail following but it didn’t have the range for effective campsite location scouting.

After 30 minutes huffing and puffing I was up on to the top of plateau and was scouring the area for a place to pitch my tent, something made more difficult by the strong easterly wind that was now rolling over the summit. I found a suitable spot at the top of an eroded peat gully, a narrow trough cut out of the grassy slopes – the gully ran north south and so did a reasonable job of blocking the wind, and quickly set up my tent, careful to keep tight hold of the various bits of canvas until things were firmly pegged down.

I cooked up a quick meal of pasta Bolognese using the only boil in the bag meal I had brought with me (hydrated rations are far too heavy for a multi-day hike) and after wolfing the contents down with the aid of my head torch, I crawled into my tent.

In spite of the protection offered by my chosen spot, the wind still buffeted the tent at random intervals and I wondered how on earth I was going to get to sleep with all the snapping and rustling around me. Moments later I was fast asleep… 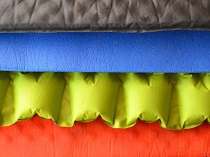 An experimental video of my trip, shot using a 360 degree camera. Take a look Click Here